Oppel, Kenneth (2004). Airborn. NY: Harpercollins. 501 pages.
Airships. Pirates. Mysterious winged creatures. Told from cabin boy Matt Cruse’s perspective, this Printz honor book follows Matt’s journey on his deceased father’s ship, the Aurora. The Aurora is Matt’s entire world, and when attacked by pirates on a trans-Pacificus flight, the Aurora is injured; Matt and the crew are just able to land the ship on a seemingly deserted tropical island which turns out to be inhabited by one of the mysterious winged creatures that the very insistent first class passenger, Kate, insists upon investigating. Matt and Kate are teamed up to find the creature, to escape another visit from the Pirates and overcome certain class restrictions blocking both of them from pursuing their desired futures.

As a recent convert to steampunk fiction, Airborn satisfied my craving for such Victorian-Industrial-Alternate world that has been building since I have been waiting for Behemoth, the sequel to Scott Westerfeld’s Leviathan. While the science in Westerfeld’s world combines the genetic engineering of animals into airships, Oppel’s world aligns more closely with our own—merely multiplying the effects of hydrogen and helium to be more useful in lifting airships. Aside from the awesomeness of alternate science, the characterizations and dialogue between Oppel’s characters feels natural with an understated humor. From mocking the first class passenger’s need for croissants while shipwrecked to the murderous pilot with a great sense of humor, I didn’t feel the hefty 500-page count.
As the first book in the Silverwing Trilogy, this is a great book to recommend to teenagers, since if they like the characters and adventures of Kate and Matt, they can continue with the next two books. The dialogue, as the strongest aspect, presents the best advocacy of this novel. I would recommend reading a small passage to hook readers into picking up this book. The short scene on pages 174-176 is a short dialogue between Matt and his bunkmate, Baz, discussing the passengers’ dilemma at not having fresh croissants. At the same time, the passage suggests the danger of being shipwrecked, counteracted with the levity of dialogue.

To purchase or learn more about the series: 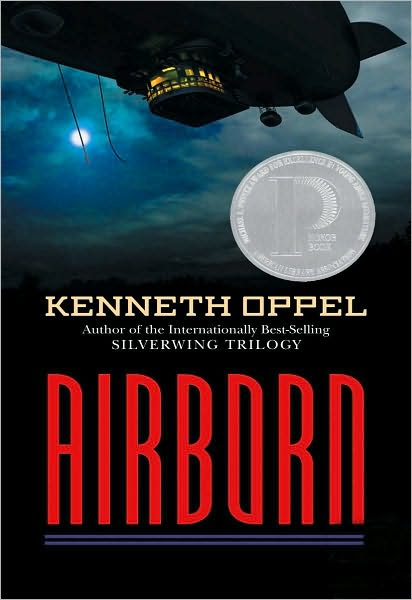