Four years after its publication and gaining status as a National Book Award Finalist, I finally read Sold. I expected a laborious and emotional strain considering the subject matter of selling girls into prostitution. It may be fictionalized, but the reality of such actions remains true. Sex trafficking of women and young girls is a topic that interests me--it is one that lures me, much like Law & Order SVU lures one into its perverted world. I want to deny that such depravity exists, yet at the same time, I want to learn all I can. That being said, Sold is a Young Adult novel; it is not overly graphic, but it is emotionally poignant. Lakshmi's poor family sells her to a woman who promises her a job in the city as a maid. Lakshmi thinks that she will be paid as a maid with wages to send home to her family; she does not realize that she is to be sold as a sex worker in a brothel where it will be nearly impossible for her to ever earn her freedom.

Told in short chapters in first person, Lakshmi relates her experience with short, staccato sentences that reflect her confusion, joy, fear, doubt, longing, hope and disgust. Her words are impactful and sparse, with some chapters relaying merely a sentence. The horrors of the brothel could easily be too much to handle both for myself and for young adult readers, but since the narrative is through Lakshmi's point-of-view, the reader navigates the situations with the same detachment as the protagonist. Lakshmi focuses on the hope of leaving, on making friends and retreating into herself for comfort. Her emotions are raw, but she defends herself with hope of home and a peace outside the realm of Mumtaz's brothel. Sold reflects Patricia McCormick's research effectively, creating a voice that is realistic and compelling. Lakshmi's situation is outside the realm of most teenage relatability, but this novel educates while still providing an opening of identity between the narrator and the reader. Lakshmi takes joy in games and learning, of friendship and hope; it is her imprisonment and inability to gain freedom that will allow readers to empathize with her struggle. I was hardly able to read the final three enigmatic lines, the lines of hope:

"My name is Lakshmi.

I am from Nepal.

I am fourteen years old."

These lines coupled with the short chapter "Sold" from pages 105-108 which  shows Lakshmi's realization that she is not to be a maid for a city family are particularly emotional, reflective of Lakshmi's narrative cadence and should draw potential readers into this world of pain, betrayal and loss of childhood. 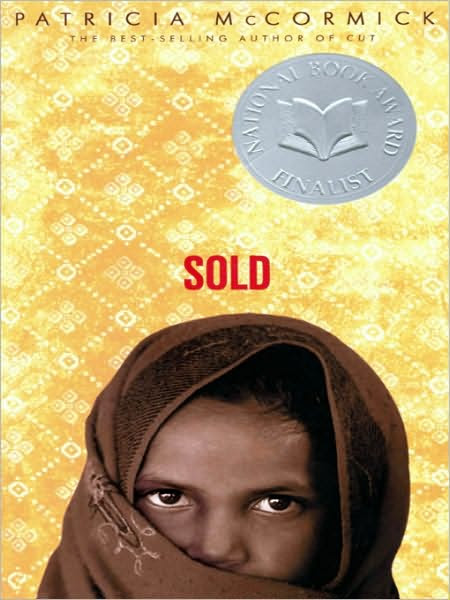