As I opened this book I knew three things: 1. I had to read it for class, 2. It was HIGHLY recommended to me from about 40 different people and 3. It must involve a homosexual romance.  The storyline is very typical for a YA romance: high school student meets new person, falls in love, makes mistake comforting ex, friend starts seeing someone bad for her, gossip mill relays incomplete information to the student's new love, they break up, mistake is rectified, they get back together and everyone is friends again. It could be hundreds of novels, yet Boy Meets Boy is one of the most atypical YA novels I have ever read.

Levithan's book is so idyllic, almost utopian in the acceptance of all sexualities. No, it is not perfect--there is some tension with Infinite Darlene's role as the star quarterback and prom queen; however, the tension is merely that between various cliques as would be at any high school. Paul, the protagonist is well-adjusted, accepted, popular and gay. His friends are a mix of bisexual, transvestite, gay and straight, in a harmonious rainbow of sexualities. The novel's struggle remains the typical teenage problems of parents and friends and love, without the added issues of acceptance because of sexuality. While this novel could be easily criticized as unrealistic or fantastic, I find it to be a delightful reprieve from those struggles; it is a hopeful high school where various sexualities just are. The struggles of the protagonist, being that of a normal teenager who just happens to be gay differs from Parrotfish by Ellen Wittlinger, another YA novel that follows the transformation of a  transgendered girl-boy. Wittlinger's protagonist, Grady, questions her sexuality while dealing with the normal teenage problems of parents, school, friends and relationships. Unlike Paul's world; however, Grady's world is far from Utopian. Grady is questioned by not only his friends and teachers, but also his parents. Leviathan's Paul is confident in his homosexuality and is accepted by his parents, his friends and his society. Where Parrotfish often feels forced and contrived--Grady's first kiss as a boy with a girl seems unrealistic in the climate of the novel--Boy Meets Boy feels perfectly natural. It is ironic that Grady's world aligns itself more closely with our own, while Paul's is the more fantastic yet more natural.

Hooking a young adult reader into Boy Meets Boy should not be difficult. A book talk describing the normalcy of the plot line (as I did in the first paragraph of this post) with and added "but everybody's gay" or something similar might make for an intriguing introduction to the novel. Introducing Infinite Darlene as Paul sees her on pages 15 and 16 of the novel would also be a means of luring those unsuspecting readers into this idyllic world. 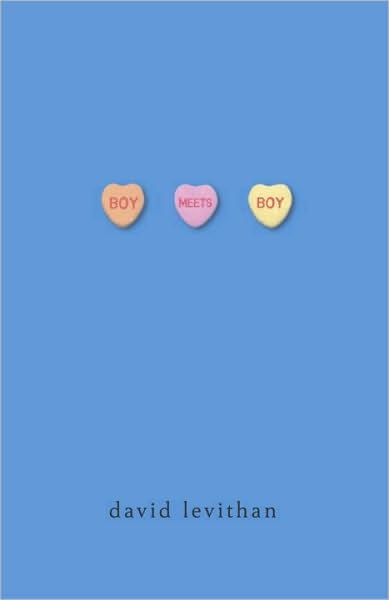