The Lost Hero by Rick Riordan

Jason finds himself on a bus to Wilderness Camp with his girlfriend Piper and best friend Leo. There is one minor problem: he doesn't remember anything about himself, his friends, his family or his past. When the trio is attacked by storm spirits during a trip  at the Grand Canyon, they are brought to Camp Half-Blood in order to embark on a quest to, well, save the world. The three teenagers discover their missing parents are Roman gods, and they are, in fact, very powerful demigods. The great hero Percy Jackson, of the series of that name, is missing at the same time that the Great Prophecy is starting to unfold. Following instinct, growing confidence in their abilities, friendship and love, these demigods fight giants and gods, winds and storm, in order to maintain some level of peace after the Titan war of the previous year.

It is entirely possible to read this book without reading Percy Jackson and the Lightning Thief series, but it is impossible to gain the richest reading experience without doing so. The characters, the setting and many inside jokes between the peripheral characters have roots in the first series. It is also abundantly clear that this book will be the first in a series (aside from the "Heroes of Olympus Series Book 1" emblazoned on the cover); the Great Prophecy is not fulfilled by the end, characters are still missing, and Jason has yet to regain his full memory.

I really was hoping that this 500 page tome would make it into the the realm of young adult despite its classification at bookstores as a Middle Reader. The main characters are about 15 and 16, independent and developing. While there are many arguments as to what constitutes a YA novel, let me offer Jonathan Stephens' definition:

the label 'Young Adult' refers to a story that tackles the difficult, and oftentimes adult, issues that arise during an adolescent's journey towards identity, a journey told through a distinctly teen voice that holds the same potential for literary value as its 'Grownup' peers (2007).

While I take issue with many of Stephens' assertion, I loosely agree with this definition and acknowledge that a text must feel young adult. The Lost Hero does not feel like a YA novel despite tackling difficult issues like being a foster child, death of a parent and parental abandonment. The novel also follows three teenagers on journeys to find their identities. There are definitely arguments that could classify this novel into YA, yet to me it feels juvenile, the voice is not distinctly a teenage voice. The Lost Hero holds potential for being a YA novel, but the voice does not push it into that final feels-like category.

Despite my claim that this book does not feel YA, it will still engage them. This is a fast-paced adventure novel that is fun and funny. Many teenagers have read and enjoyed the Percy Jackson Series and will be delighted to move on to The Lost Hero Series.  Here is the publisher's Book Trailer which will whet your appetite for the book: 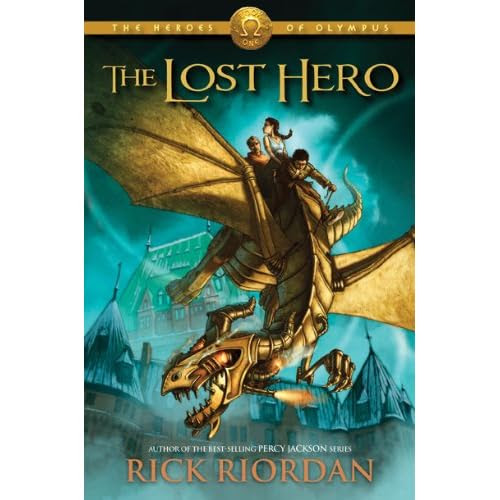